At the time, I didn’t realize the Kodiak that I recently acquired was going to be as challenging as it has been. But then again, nothing good every came easy.

Looking past the ragged parts, surface rust and a frame that’s been rode hard and put away wet, I anticipated a quick strip down and speedy build up.

With the tear down complete, the frame scrubbed, the rust removed (best as I can) along with the parts cleaned, oiled and lubed, one would think I was on my way.

Enter the details of rebuilding.

This frame was constructed within a window when Shimano was pulling some odd moves. With advent of the Dura-Ace and the AX and EX group sets Shimano decided to create their own proprietary style of shifter boss. It is unclear how long this style of shifter boss was around but it is clear that its reign was short lived and didn’t exactly take off.
The “Shimano Shifters” or “B-Shifters” look like normal bosses but the anchor holes for the ends of the springs are on the outboard sides. This also gives them a rounded base rather than the conventional square style boss. When you look at them straight on, they resemble a keyhole.
The stock Deore shift levers fit this obscure style boss and I hear that some vintage Shimano index shifters can able however mounting other brands of shift levers and/or down tube cable stops can be problematic.

Since I have decided to install period appropriate Suntour bar end shifters and need down tube cable stops, I am now categorized within the problematic category.

Another element I did not consider was having difficulty finding screws which would hold the cable stops to the bosses. 4mm was too small and 5mm was too big so I ended up using standard size stainless steel bolts instead of metric. Of course, these also had to be extra long to make it into the bosses.

Let’s see a picture based timeline of the fallout:

Side view of the “B” style Shimano proprietary shifter boss. This shot was taken prior to cleaning and removal of surface rust.

Marking and securing the cable stop.

Tools: A vise, file, patience and a steel brush to clear the aluminum burs off the file.

One notched, one to go!

Another angle to show underside of cable stop. New, longer screws will be required.

Cable stops all wired up.

Lucky for me this less than ideal solution is only temporary.

The focus of this build is to determine potential, fit and to give me something to ride all summer. If the frame is everything I hope it will be, when the late fall hits, all the tweaking and adjusting will be in vain.  All parts will be stripped off (again) and the frame will be shuttled away to a local frame builder. The mysterious bosses will be swapped out for something standard but I realize that once I have traveled down that path of destruction the only logical next step is removing the paint from the frame and doing a full repaint. But, that reality is still tentative and half a year away.

So for now, this setup is going to have to be good enough.

As mentioned in other posts, Dan, a cyclist from Baltimore, Maryland and regular comment contributor on the website, has passed along more than just perils of bicycle history wisdom. As an owner of multiple Raleigh Kodiak bicycles, Dan has also gone through the conundrum of modifying shifter bosses to accept cable stops rather than keeping the stock Shimano Deore down tube shift levers. Attached are a few images and a short write up Dan shared that I felt would enhance this post for those who will inevitably run into the same shifter boss incident as Dan and myself. Hopefully, this helps you out, future reader.

Using Shimano cable stops and drilling the inside of the stops using a drill press and a 1/2″ drill, the stops fit snugly against the down tube. (Hint: I screwed the stops, inside facing up, onto a scrap 2×4 with a screw that fit in the mounting hole. I then mounted the 2×4 into my press vise, and held the stops from turning using a pair of vise grips. I drilled very slowly, making sure not to go too far.) I also had to manually file one edge of each stop to fit over the tab of the boss.

I removed the front side stop from the boss, spun it on the cable, and placed an unaltered one next to it. Hopefully its easy to see the difference between the “new” and “drilled” stops.

The original 4.5mm screws that held the original shifters on the down tube bosses have 2 full turns of grip on the new cable stops, enough to be snug.The images of the stops installed show they mount flush to the tube and the original down tube screws reach the boss with just over 2 turns until snug (without washers). 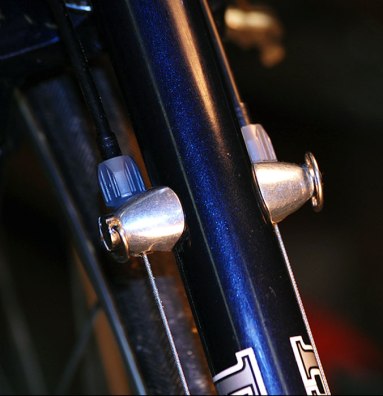 A job well done, Dan. Your cable stops fit on your shifter bosses quite snug without any unsightly gaps.

Thanks for sharing your process and the final results!

Dan took one approach by modifying the cable stops only. This is obviously a perfectly adequate way to achieve desired results however, since my above solution was dubbed “temporary”, I decided that after a year in service, my original result needed refreshing. Since a drill press is not something I have in my arsenal, I went with the somewhat more intimidating and permanent choice of modifying the shifter bosses.

My goal was to take the 4.5mm bosses and by using a tap, cut new threads to accommodate a more common, easily found 5mm socket head cap screw. 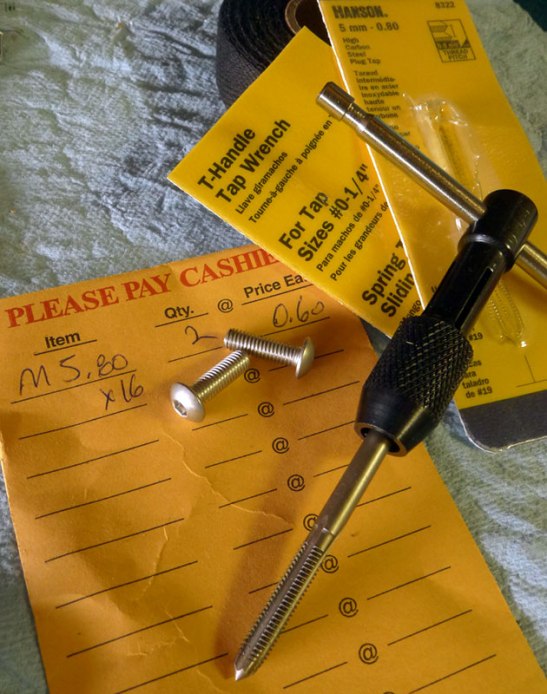 Tap and handle: Tools of the thread cutting trade

The process ended up being simple, quick and extremely effective.

Step 1: Firmly assemble the tap and handle.
Step 2: Clean out shifter boss mounting holes leaving them free any of grease and grime.
Step 3: Add a few dribbles of oil (I used motor oil in a syringe) on the inside threads of the bosses and on the tip of the tap.
Step 4: Insert the tap into the mounting hole. Slowly and gently, twist the tap handle clockwise a quarter of a turn at a time. After a half turn or so, back the tap out by turning it counterclockwise to cut off the newly produced threads. Continue until the tap bumps up against the frame inside the shifter bosses.
Step 5: Twist the tap fully back out, clean out the hole and turn clockwise to reinsert the tap one last time to make sure threads were cut well and no metal chards were left behind. 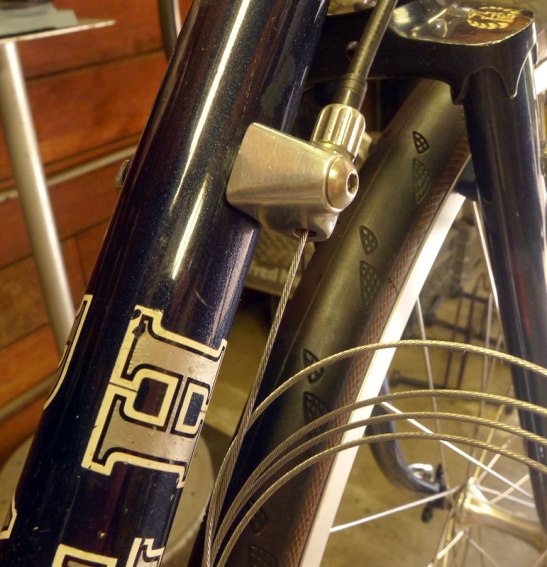 This solution turned out to be a decidedly more secure cable stop to shifter boss connection. I was able to snug them down removing what Dan accurately described above as “unsightly gaps.”

My method takes an extra step of not only modifying the cable stops but also altering the shifter bosses. With Dan’s step above, only the cable stops are modified. His technique is obviously less work and nothing is permanently altered on the frame. But, I do not see my frame alteration as anything too alarming. The 5mm tapping is simply adding convenience. Plus, if you don’t have a drill press then the choice to alter the cable stops and tap the holes out to 5mm is simply is not much of a question.

Obviously there is more than one way to get around the frustrating B-Stop Blues and I am certain there are still more. If you have a different technique that worked for you, feel free to contact me as I would be happy to update this page with your technique(s) to help future owners of B-Stop shifter bosses who would like different options other than using the one-dimensional Shimano Deore downtube shifter levers.