At this moment, featured on Craigslist ads all over America, there are scores of Centurion Ironman Dave Scott’s available for purchase. Why then, is this one any different?

The answer to this question begins with a woman named Georgena Terry. Georgena is in the business of creating bicycles specifically for women. To quickly summarize, she was not satisfied with the geometry on bicycles, as many models did not fit smaller framed women. She began building her own that were more proportional to that particular frame. Her friends wanted bicycles, word spread and the rest is history. Her fascinating history is well known around the cycling circuit and more information is easily found with a quick search, which is why I won’t go into further detail about this frame-building pioneer. 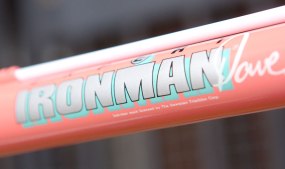 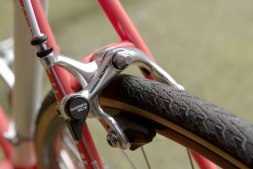 The Centurion Ironman Expert, Dave Scott edition is a bicycle that was a mid-to-high level frame, fairly underrated yet was produced on a moderately large scale. This means, there are still scores of these fine bicycles still floating around and priced quite reasonably. But this particular bike isn’t just any Ironman, this is a Georgena Terry Inspired Ironman. A model, in the 1987 lineup, that was produced for only one year.

Major differences are clearer when you know what to look for. Mainly though, the 24” front wheel is the oddity. This size wheel permitted a lower standover height while still having the ability to use traditional lugs and a horizontal top tube. It also allowed for a shorter top tube, without severe toe clip overlap from the front wheel.
24” wheels are clearly a non-typical size. They weren’t, and still are not, found at most local bike shops. They were special order items at the time and certainly aren’t plentiful today. But, the frame adjustments and the wheel size worked and the concept was reproduced on a number of other bicycle brands including Nishiki and Miyata, to name a few. 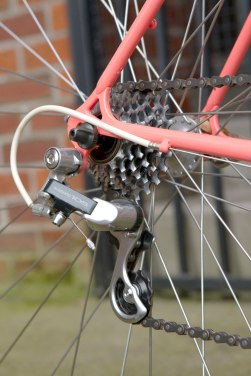 I can say with certainty that my favorite aspects of the Centurion Dave Scott editions are how instantly recognizable they are within a certain decade of history. The Dave Scott edition was produced from 1985 to 1989. It is clear this frame was screaming 80s from the beginning of production and didn’t let up until productions end. It became even more electric with the additions of geometric shapes on the Centurion logos and paint that became wilder. Yet, it fit with the decade. An explanation found states that the Centurion design group style was in full swing with the popularity of Miami Vice. Bold magenta’s, primary yellows, aqua, white and even the salmon pastel, as offered above, provided a frame that boldly cemented itself in a distinct time period.

Although this particular line of Centurion is not to everyone’s liking, there is something special about the model lineup. Whether that is the intense colors, the pristine lugwork, the bulletproof Shimano 105/600 groupsets (standard on all models) or the specially made model made specifically for a smaller body type.

There is beauty in everything if you just look close enough.