In 1978, Paul Sadoff of Rock Lobster was just beginning his career building custom bicycles. The story of his 1960 Girardengo doesn’t start there, but it wasn’t much later.

Paul originally posted the story of how the Girardengo came to be on his blog. After reading it, I was compelled to introduce myself to let him know how profound the verbal journey was to me.

Isn’t this story just about a bike? Sure. I suppose. A bunch of steel and some rubber tires. But, oh dear reader, we all know it’s more than that. You wouldn’t be here, visiting a site like this, if you believed otherwise. It spans beyond just a “thing”, but using it as a conduit for conjoining a myriad of different emotions, ranging from both complex to straightforward. The post was a genuinely written, heartfelt story mixed with an “ode to” that memorialized an infrequently seen friend and the Girardengo Paul was promised a couple of decades ago. Once you start reading, I just dare you to stop.

For me, Paul’s story struck the ultimate chord—it made me feel something. It is clearly written from the soul and those are the narratives that we, as humans, connect to most. His story did just that for me. And right now, with seemingly everflowing frustration, uncertain times and blatant injustice occurring in our world, it is stories like his that speaks to the human spirit to shake us loose and remind us that there is good still left in the world with threads of compassion, kindness and honor to those we care to recognize and remember.

Thank you for the memorable and powerful piece, Paul.

Do you have a bicycle with a history you feel is worth sharing? If so, please consider contributing your own journey to Tell Your Story.

Images and Story by Paul Sadoff 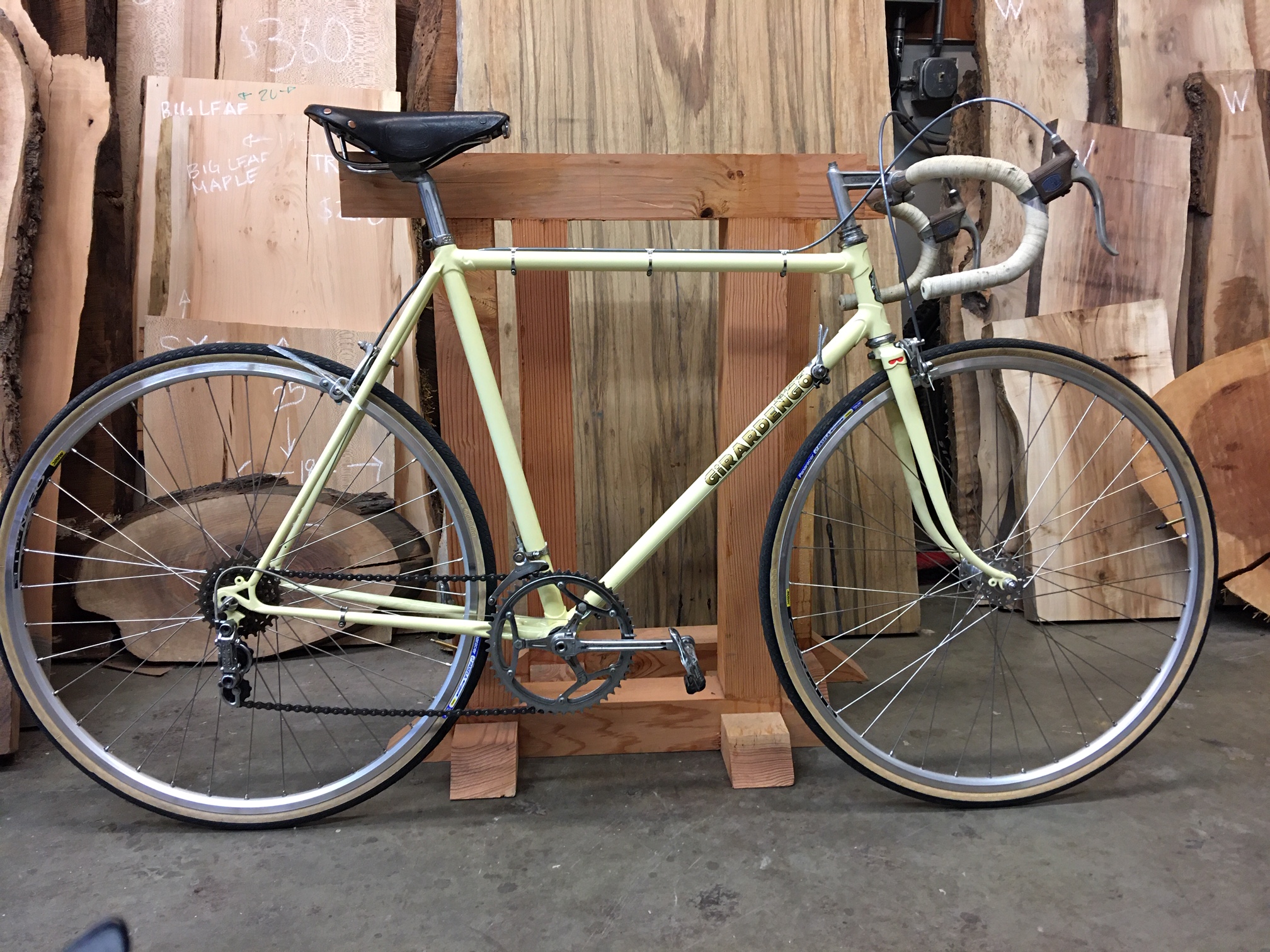 Back when I had only been in business for a few years a fellow came by on an old bike wearing a white tee shirt and no real cycling clothes. He asked if I could do some non-bicycle related soldering jobs for him. I said yes, and a few days later he showed up with some small pieces of metal to be soldered together. The work was very delicate but I was able to do it to his satisfaction. This began a friendship that lasted a few decades.

Not much later, I moved my shop from my garage to a place across town that was pretty close to my friend’s workshop/home. He invited me over to see his fleet of bicycles. When I got to his house I saw a pretty impressive array of bikes from the 30s up to the late 60s. There were bikes hanging from the roof, bikes leaning everywhere and hardly room to walk through the house. This was maybe 1993 and things only got more crowded with bike stuff as the years wore on. For some reason, my host told me that he might have a nice older frame that I could restore in my size. He usually looked for stuff that would fit his 6′ frame but I guess in a weak moment he bought the carcass of a 1960, 55cm Girardengo bicycle. 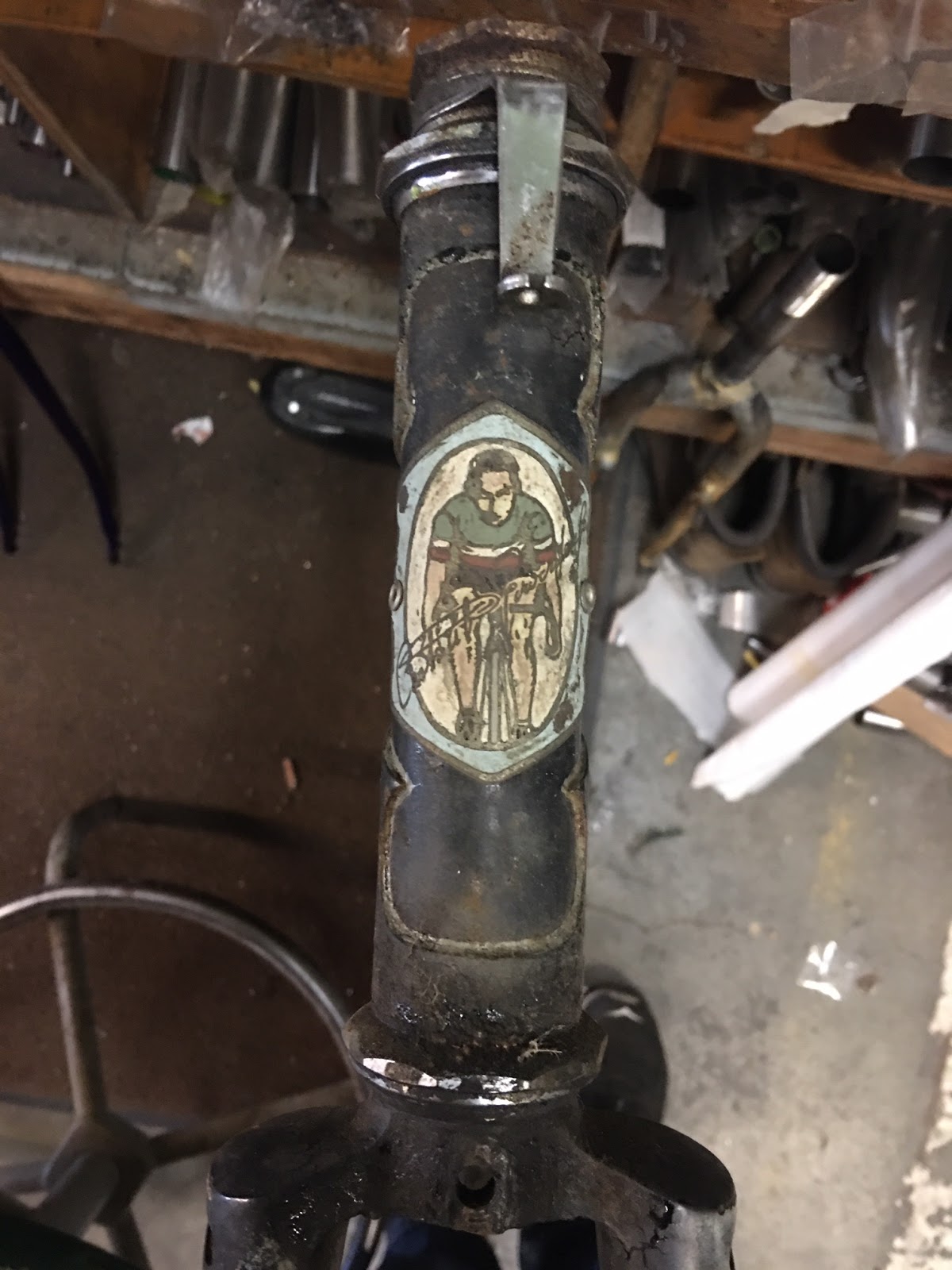 For those that don’t know cycling history, Constante Girardengo was Italy’s first big cycling champion-his time was around 1910-1920. After he retired from racing he licensed out his name to a bicycle company and later to a motorcycle company.

My friend said that the frame was buried deep in storage and it might take awhile for him to dig it out.

The bike my friend had was probably from about 1960 and was in pretty sorry shape as the above photo shows. I asked how much he wanted for the frame and he said $40.00. I said, “great, when can I pick it up?” This is when the long wait began. My friend said that the frame was buried deep in storage and it might take awhile for him to dig it out.

The years went by and in late 1996 I moved my shop back to the west side, closer to my house. My friend would stop by periodically, some times on an old bike, some times on a mountain bike that I had put together for him out of parts from a warehouse sale. Every time I saw him I reminded him that I was still interested in the Girardengo. Every time he would tell me that it would take time for him to find it. After a number of years I stopped asking-the decades went by.

A few years ago, my friend was diagnosed with cancer and began a long period of treatment. He went in and out of being able to work and his visits became less frequent. In the fall of last year I got a call from another friend to let me know that my bicycle hoarder friend was in hospice and might not live much longer-if I wanted to see him I had better do it soon. I gave him a call.

When I showed up to the hospice, I was treated to a great visit and many great stories. We shared memories of a mutual friend, another bicycle history buff who had just passed. It was a great visit. It was at this time my friend said that he had given his bicycle collection away-a friend of his had a big piece of property out of state and was willing to bring a huge truck and take everything away. Even though I was sad to hear that his entire collection was gone, I knew that he had needed someone to deal with it as it would be a monumental amount of work to find all the bikes and get them out of the house.

A few weeks later I had another visit with my friend, this time I got there just as he was starting dinner. I told him about a restoration I was doing and that I needed a few older parts. My friend told me that he had everything I needed but that it had probably already been hauled away- I told him not to worry-I was in no hurry to complete this restoration- the bike was something I had inherited from yet another old bike enthusiast who had died a couple of years back. I sat and traded stories with my friend for a couple of hours. This would be our last talk.

About five weeks later I called my friend- there was a strange unfamiliar voice on the voicemail message that said to call another number. I called the number and talked to the person who my friend had instructed to deal with the dispersal of the rest of his worldly goods-He had passed just a couple of weeks after out last visit. The man on the phone told me he had a bike that I should have, my friend’s main bike- the one that he used to ride over to my shop. It was too big for me but the man insisted that I have it.

When the bike was delivered to my shop, the man- a very close friend of my departed bike hoarder-looked at my shop, heard about the history of my business and told me that he needed help dealing with all the old stuff at my friend’s house. It turned out that there were still a lot of older bike frames and parts there. I agreed to help him and he said that I was welcome to take whatever I wanted out of the massive pile of bike parts.

As soon as I got the frame in the light I realized that I had in my hands the very frame that my friend had intended to sell me 27 years ago.

The first day of many that I would spend cleaning out my friend’s old house we went into two storage sheds that were filled to the roof with all sorts of old bikes, parts and other items. After a couple of hours of digging, I saw a black frame in bad shape that looked about my size. I had already told the man in charge of the estate about the  $40.00 Girardengo that I had never gotten. As soon as I got the frame in the light I realized that I had in my hands the very frame that my friend had intended to sell me 27 years ago. I asked the man if I could have the frame-he said by all means, so I put it in the back of my truck, along with an assortment of older parts and frames.

I would continue helping with the estate for a few more weeks but always was thinking of what I would do with the Griardengo. I wanted to honor the memory of my friend and the passion he showed for older bikes. His knowledge of bicycles from 1920-1960 was very deep and I wanted to make the Girardengo ride again with all the correct parts.

In the photos above you will see the newly restored Girardengo- not having been ridden for probably a half a century. Now it is rolling with everything as it should be with the exception of some modern rims and a fairly modern seat post. I had to align the frame and fork and was fortunate to find some decals on the internet. As of now, I think I have about 40 miles on it. I imagine that if I had not gotten the frame it would be in the landfill by now.

So it turned out to be very true what my departed friend said- ” It might take some time for the frame to get dug out of storage.” While I would much rather have my friend still alive, at least I have this bike and our mutual history to remember him by. Every time I go out on a ride on this bike I thank my friend- In life he provided me with some great bicycle history lessons. In death, he unwittingly made good on a promise of a $40 frame that he knew would be a good project for me to take on.