The progress for the ongoing Raleigh Portage project has hit rock bottom. In theory, the frame won’t look any worse or be any nastier than at this stage.

Before the beautification process of paint can occur, before the starry-eyed, mouth frothing fun of sourcing parts can happen and before the anticipation of inserting the first bolt to build up the bicycle takes place, frame restoration is the most pressing matter.

Beginning with only a simple frame modification request, my laundry list quickly launched into a number of to-do items since the single request would require it to go under the torch. Being a resident of Portland, Oregon, the city is blessed with a branch of the prestigious United Bicycle Institute. The school employes legendary framebuilders as instructors passing down their craft and cranking some of the finest new artisans and all within our city limits. Also lucky for us Portlanders is the number of high-caliber framebuilders already established and claiming the city as home. Through high praise word-of-mouth, I was introduced to Travis Cooper of Cooper Cycles and realized quickly he was a perfect fit for my frame alteration needs.

After a consultation, Travis and I came up with a number of adjustments that the Portage could benefit from.

1) Rust and Cable Guides
Being that there was significant rust on the top tube cable guides (and on the underside of the first cable guide), Travis suggested bead blasting the areas to make sure the rust had not gone through the steel. If all was well, all three cable guides would then be replaced with two cable stops. The idea is that the less cable housing needed, the less drag the cable will encounter helping overall braking performance. I have also heard the cable stop method also improves rear braking and saves weight, although the difference on weight is miniscule and shaving off a few ounces is not high on my list of priorities for this build.

Since this area was being modified, Travis also suggested positioning the cable stops to the side rather than on the top of the top tube. This can help with decreasing the stress on cable and housing when connecting it up to the rear brake. Since no bicycle I own has this style of cable routing, I figured it would be an interesting test to see if the modern cable stop placement was in any way more beneficial than the top mounted cable guides I am used to.

2) Chainstay Cable Stop
On the topic of cable stops, Travis also noted that the rear derailleur chainstay cable stay was the older, “step down” style, which I had not considered. Meaning the cable housing ferrule needed to seat properly in the step down style cable stay is rather specific and, as I have experienced in the past, somewhat difficult to find. Travis suggested that for the sake of consistency and ease of connecting cable housing, I also upgrade this area to cable stops. A recommendation I gladly agreed to.

3) Proprietary Shifter Bosses
As noted before on both the Raleigh Kodiak project and the initial post on the Portage, the current shifter bosses were the notoriously frustrating and proprietary Shimano Deore system. Without some kind of modification, they are compatible only with those particular shifter downtube levers, which quickly becomes an issue for those that want something other than Shimano Deore downtube shifters. This matter was my initial reason for the modifications in the first place as I dislike being so limited in my selection of what I can and cannot do with shifter bosses. The Shimano bosses were removed and replaced with standard bosses. 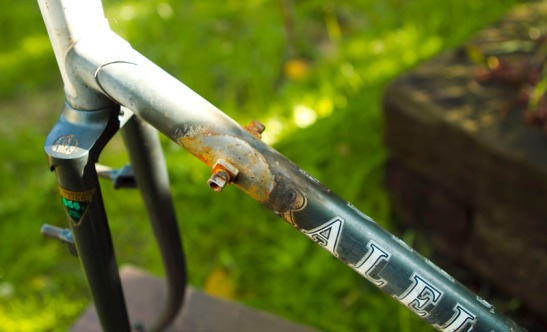 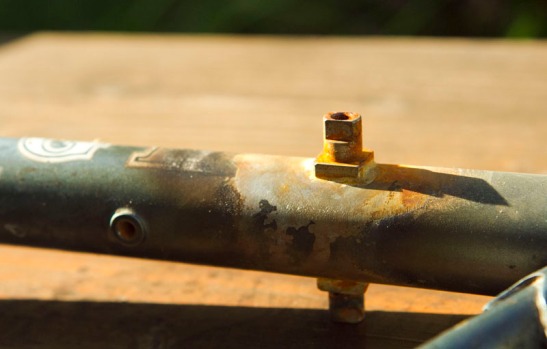 4) Rear Drivetrain Spacing
Last, being that the frame was from the mid-80s, rear spacing was locked in at 126mm, the standard for the time. Modern drivetrains sport 130mm to accommodate a wider range of gearing. This is something that is not entirely necessary for my build but again, since modifications were being made anyway, why not make life a little easier for myself when it came to purchasing a rear cassette? The newly spaced 130mm frame would also give the added benefit of accommodating a wider range of hub selections. Since I purchased this bicycle without wheels, this modification started making more and more sense.

Looking back at the adjustments, I could not be happier with the quality of the work and what areas on the frame were modified. I was also extremely relieved that my main concern of rust penetration throughout the frame had not become too much of a problem. I was told that the deepest of the areas, specifically on the underside of the first cable guide, should not be an issue for a painter to fill in, sand out and proceed onward with painting.

Music to my ears.

Now, on to the next milestones.