After two years, the fruition of a final product emerges: A legendary touring frame, blessed with stock 650B wheels, morphed into an upright city bike. Keeping my plans quiet and not rushing has allowed me to focus on a product that was exactly what I had envisioned since the beginning. But taking a frame, so deeply seated in touring roots and tweaking it to create a delicate balance of upright cycling harmony was far from simple. Mostly everything needed to be rethought. Or at least the most challenging elements had to be like the drivetrain, gearing and cockpit. In fact, the only original parts left on the bicycle are the brakes, the Flickstand and the Raleigh Heron head badge. Although the head badge did get new rivets. Everything else was either purchased new or in lightly used condition.

Another goal was to create a product of impermanence. Sure, it’s an upright city bike now but my overall desire was to have it set up so that over the course of a weekend, I could swap what I needed to easily revert back to the touring juggernaut it was born to be. Nothing is to the point where it cannot be undone to benefit whatever feel the bike is going for. 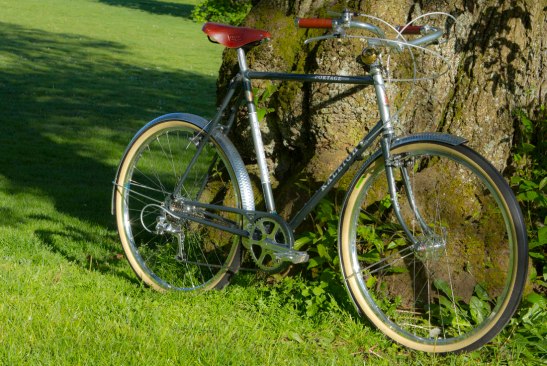 With so many previous posts (1, 2, 3 and 4) regarding this frame, most topics have been addressed. But, now that assembly is complete, there are still a number of elements to look closer at, so some images below will dive deeper than others. Some shots speak for themselves. But since this build took more time, effort and funding than any other project I have had thus far, I have included a larger than normal amount of images to showcase the final product. And like usual, for those of you who want to trudge further into the weeds, don’t forget to check out the full build specs at the bottom of the post. 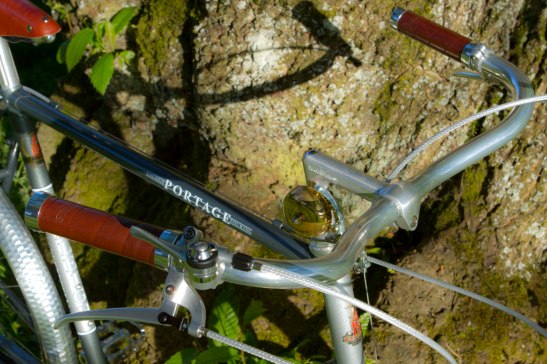 Comfortable Nitto Albatross bars gracefully sweep back to keep me upright. The bar ends are capped off by slender Brooks leather grips for an elegant look with a durable finish. The Paul Thumbie shifter keeps my hands on top of the bars so there is no reason for them to wonder anywhere else. 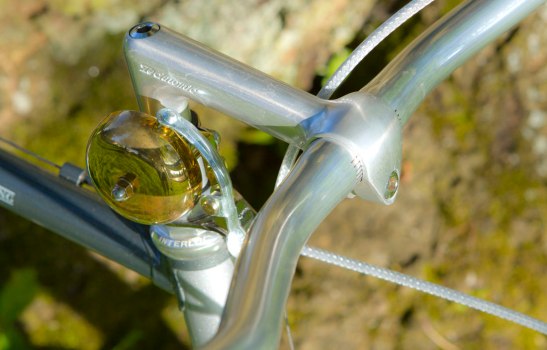 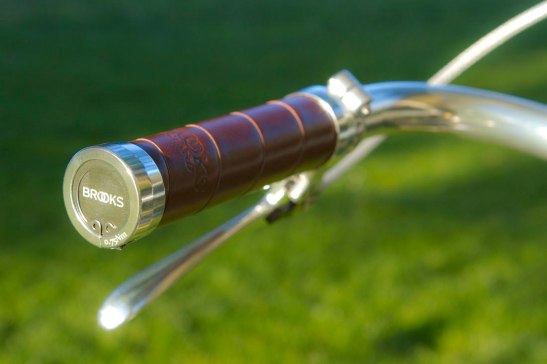 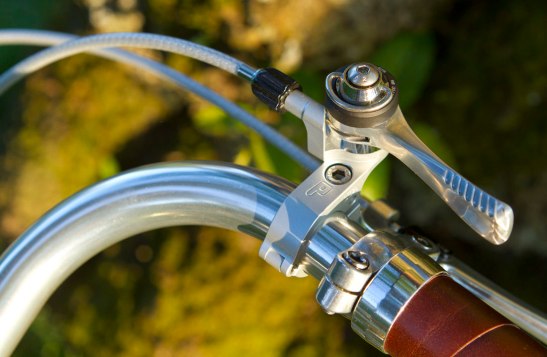 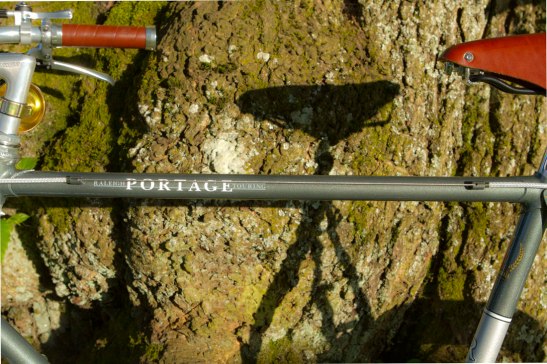 Frame alteration is a funny thing. By adjusting what a manufacturer has already determined “finished” one runs into elements they may not have had to considered otherwise. By moving the top mounted cable guides to cable stops on the side of the tube, the issue of where the brake cable cut through the decal became alarming. Luckily, both the frame builder that performed early alterations and the painter, who applied the decals, perfectly placed their respected work allowing the brake cable to pass precisely through the a logical spot in the decal. 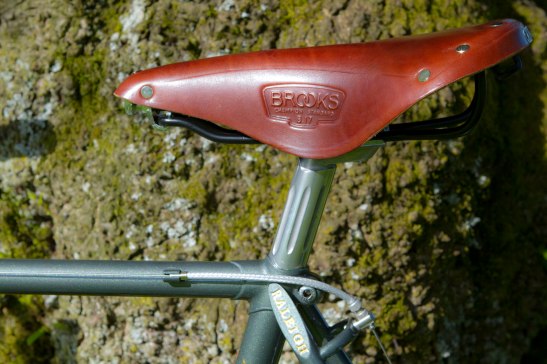 The frame originally came to me in a sad condition. It also came with very few usable parts. One piece I vowed to keep was the history that remained on the head badge. As I have mentioned before, despite the punishment the frame took in the past, the Raleigh Heron still stands proud. 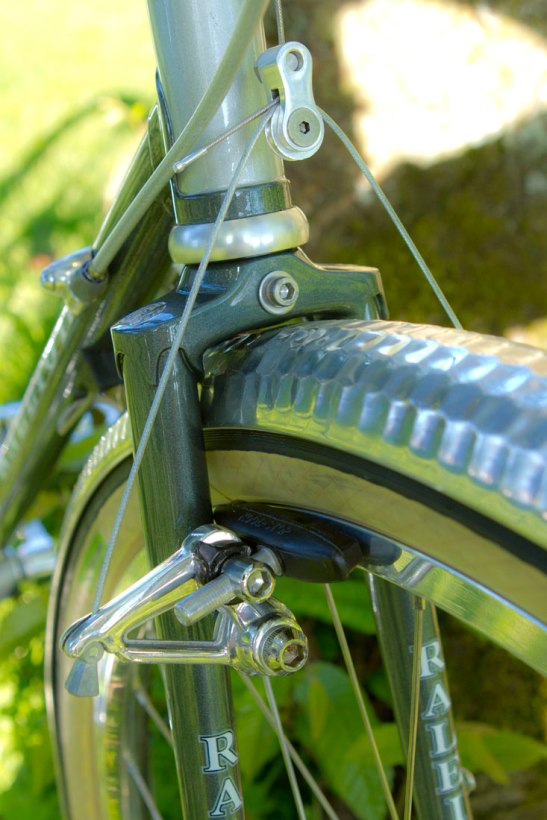 Since the Shimano BR-MC70 brakes came with the frame, and being that they are legendary cantilever brakes, I absolutely wanted them on the final build. No cable hangers were provided, so this gave me an excuse to purchase the Velo Orange Grand Cru straddle wire roller hangers. These were the style of hangers used on some of the finest constructuer bicycles ever made. They are cleverly engineered in their cable pinch, setup is a snap and they look gorgeous. Do they perform any better than standard plate washer pinch bolts? So far, no. Not really. Do they look better? Unquestionably, yes. 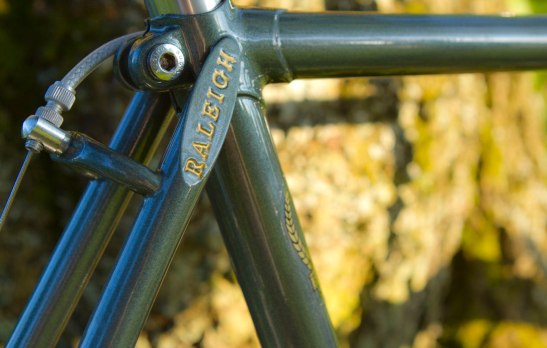 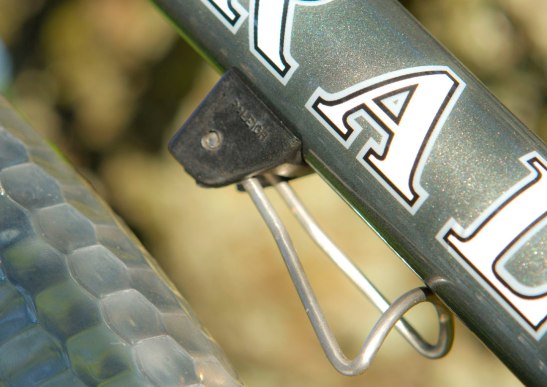 Raleigh branded Flickstand and boss to secure it

The Flickstand. Some hail it as a brilliant little device while others claim it is a silly gimmick. Regardless, this little gizmo is the last standing piece of original equipment on the frame. But, with the fenders on, the item is utterly useless. Its intention is to facilitate easy parking by positioning the wire device downward, grabbing onto the front tire and allowing for one to easily lean the bike without the steering mechanism turning causing the bicycle to fall. My intention was to show that there is an actual boss brazed on the frame dedicated for this specific device. The Flickstand’s I have seen previously are typically a thick black mounting strap that goes around the down tube that looks clunky but gets the job done. A boss gives a clean mounting point and if I hadn’t installed fenders, I likely would keep the unit mounted on but with no point for its function, it will be removed and was only shot on the bike for posterity. Also fascinating is that the item is specifically Raleigh made. That in itself seems to be quite unique. 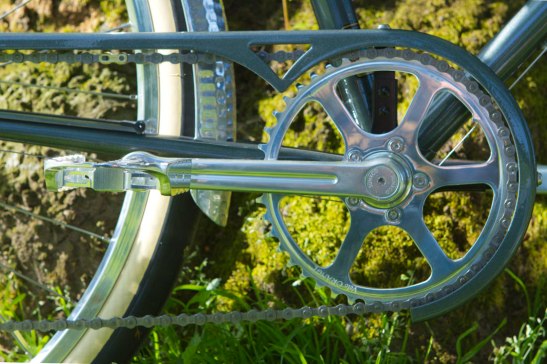 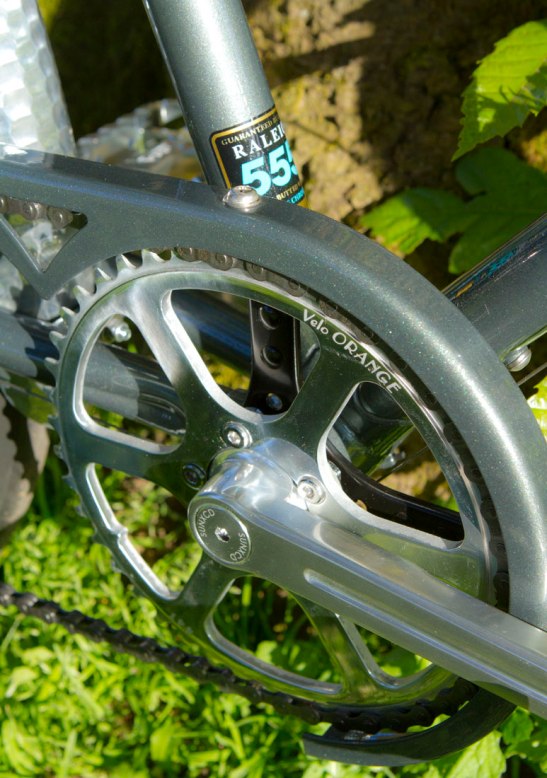 The chain guard has been a must-have since inception of this project. An upright commuter bike means casual clothing and trousers that may get caught in the drivetrain or soiled by grease while riding is unacceptable. The Civia chain guard was the most minimal guard I could find and I liked it so much, I had it painted to match the frame. Although a strong idea on paper, a number of issues came up that I had not expected. First, it can only accommodate, at most, a 44-tooth chainring. This isn’t too big of an issue, but it played into the selection of the rear cassette range. Also, the rear connection for the guard was not as I had envisioned since most chain guards are mounted on straight, single-cog setup. Having a rear cassette and derailleur made adjusting the guard tricky to keep it out of the way of chain travel and, at the same time, make sure the guard was straight and level. So far, it seems to work but I’m keeping a close watch on it as frame flex may change the tolerances.
Does it look good? Absolutely! I feel that it is one of the most gorgeous modern chain guards I have seen. 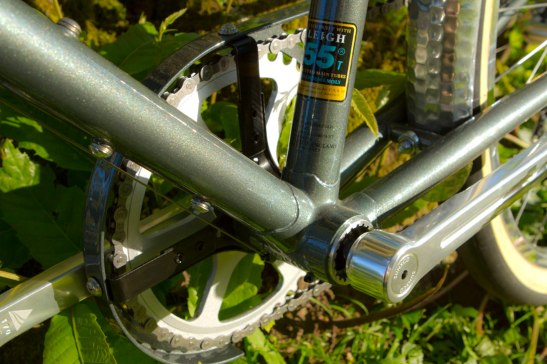 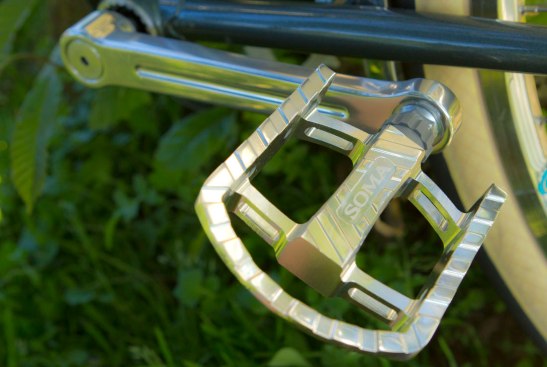 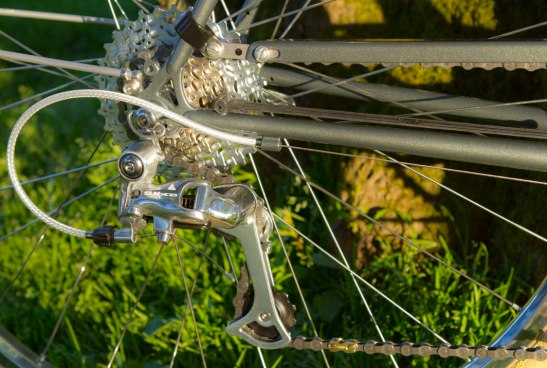 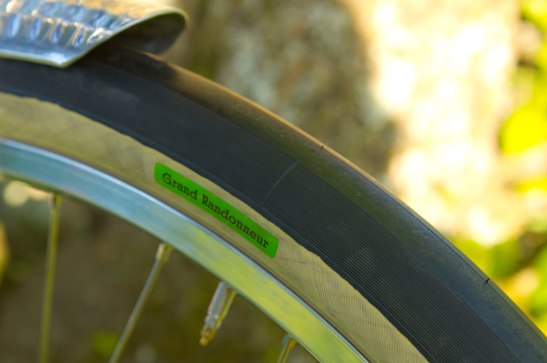 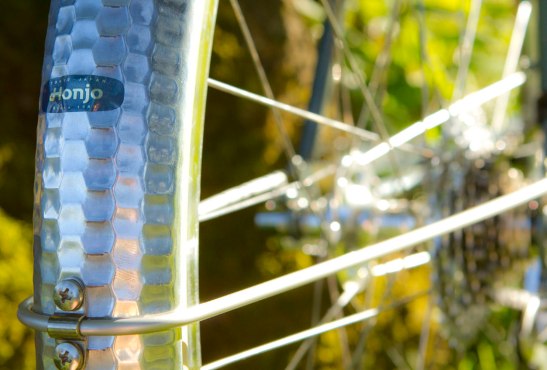 Surprise! Honjo fenders do not come with any instructions other than a few small bags of parts and some scraps of paper with Japanese typed on them. For those of you interested in installing these fenders on a future build, be aware that they are extremely challenging and non-user friendly fenders to install. The payoff is tenfold however as they are the highest quality metal fenders I have ever owned. Pros and cons. 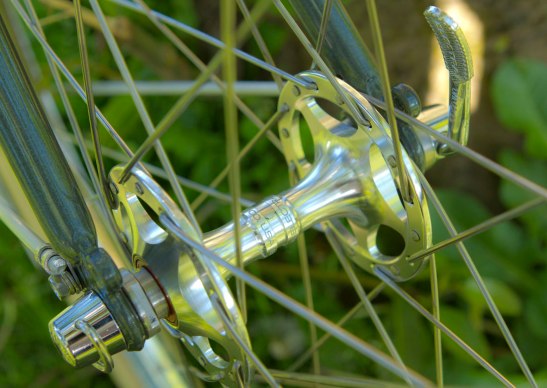 Some say that Campagnolo C Record “Sheriff Star” hubs were some of the most beautiful hubs created in their illustrious 25 year run. Some also say they were too fragile. Either way, unearthing a pair commands patience and premium prices so I went elsewhere. Electra, a name certainly not known in the vintage world, created a handsome pair of Sheriff Star replicas complete with sealed cartridge bearings instead of cups and cones and “a bit more metal at the flanges, which might make them a little more durable, or at least more confidence-inspiring than the originals — assuming the C-Record reputation for fragility is true.” The hubs are simply gorgeous and are some of the smoothest I have ridden on. Both form and function are satisfied to the highest degree. 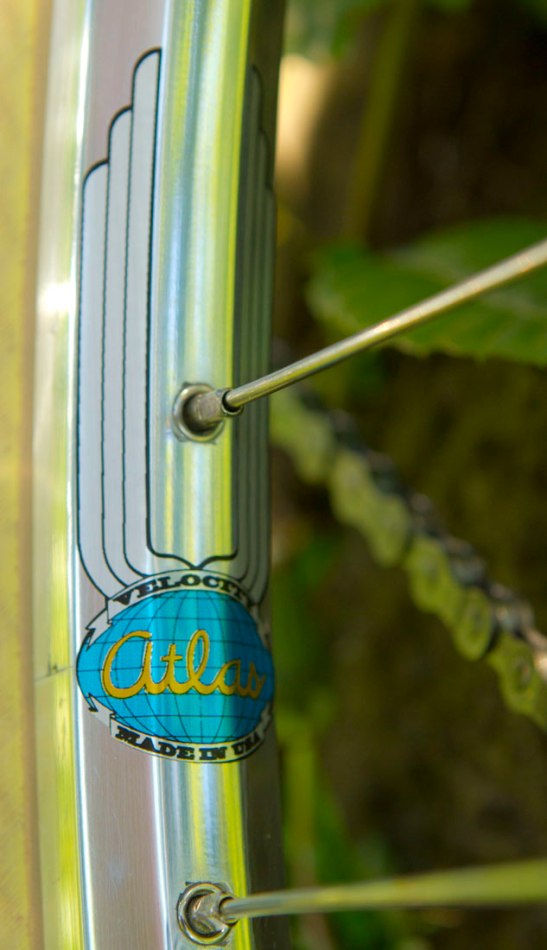 Velocity boasts, “Atlas. So strong it can hold up the world.” And that Art Deco logo isn’t too shabby either!